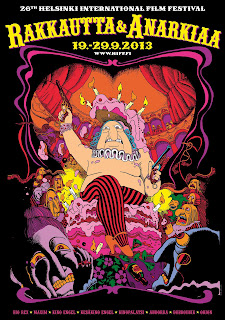 The most important time of the year is nigh, and the Helsinki International Film Festival is almost upon us. There are more than 300 films on display there, so many readers might have a hard time choosing what to see. I did a short list on Twitter, but since Tweets tend to get lost in the waves of the sea of information, I got requests to do more. So, blogging is a bit more substantial. Here's my top 10 tips.

Ever since this film debuted in Cannes to the ecstatic reactions of French film aficionados, there's been little doubt that this comic book adaptation about a girl's first love (that happens to be another woman) would be perhaps THE biggest event movie of the year. The fact that this 3-hour mammoth was chosen as the opening film of the festival seems to confirm this notion. I simply cannot wait.

At the moment, the official Finnish premiere date of the film is 13th December.

Payne is back to doing what he does best, so this is another tragi-comical road trip through America, starring a curmudgeonly old man (Bruce Dern), and his estranged, clueless middle-aged son (Will Forte). Maybe this is Payne going through the motions, but he hasn't failed me yet, so I won't miss this.

After seeing the brilliant Take This Waltz last year, I became convinced that the future belongs to Sarah Polley. The biggest young hope American cinema has, has directed a documentary about her own family, about her actress mother who died at an early age, and her foster parents. Reports have so far said the film is sufficiently warm without being schmaltzy, so I'm in.

Mark Kermode has been raving about this story, based on true facts, about an ad executive running a campaign against the Chilean dictator Augusto Pinochet. An exciting political thriller, with a story almost too weird to be true. Yes.

This was almost a DVD premiere here, but luckily we also get a cinema screening or few of the Korean mastermind Park's first English language film. And a good thing too, since Park's slow-moving films are always best screened at a theatre, not at home. This twisted, dry horror-comedy seems very intriguing, but I've been avoiding reading too much about the plot.

Two new films from the genre-bashing English director have generated plenty of positive buzz. I liked Kill List plenty, although did not hail it as good as many others. But from what I've heard, the director has just gotten more unpredictable, twisted and skillful since. These are also films I figure it's best not to know too much beforehand.

In what's surely to be the most talked-about documentary of the year, we get a chance to look the closest appromination of human evil straight in the eye. Indonesian death squad leaders talk about their past homicides and cruelties open, as if there was nothing wrong with it.

The TV version of the film will be shown in Finland in YLE TV2's Docventures series on 6th of November. The version at Love & Anarchy is the longer Director's Cut, and director Joshua Oppenheimer will also be present at several screenings.

HIFF doesn't really offer as many groovy exotic action movies these days as it did in its heyday. But from this year's crop, it's easy to pick this Indian cop thriller as the most promising one. This is no Bollywood song-and-dance number. It's based on true brutal police shootings, but doesn't spare on the guns, bullets and chase scenes. Yeah!

This French movie won the audience award at Midnight Sun Film Festival this year. This is another depressing crime flick, but those thrillers seem to be the most interesting when all of its main characters are several levels of assholes. Morally grey is the way to go, and I trust Denis's experience as a director.

10. The Past / The Future
Dir. Asghar Farhadi / Alicia Scherson

Here's a bit of a cheat, but considering the names of these two films, I couldn't resist putting them to the same slot. The Past is A Separation's director Farhadi's latest film. It's a Mystery film about a runaway Iranian man to return home after a long absence to find his wife remarried. It seems Farhadi has another story of the difficulty of maintaining a nuclear family, even in a state that officially warrants it. If you liked Farhadi's previous film, it seems you can't go wrong with this one.

The Future is the story of two idling teenagers, off to a criminal path, until they come across the former muscle movie hero Maciste. The latter is played by Rutger Hauer himself. It seems the film has plenty of Neo Noir influences, but it appears to be hard to grasp, which always makes for an intriguing experience.

So are you Traditional or a Futurist? Never mind, I'm sure you'll find plenty to see at Love & Anarchy. The entire programme is now open at the official web site.
at 23:45