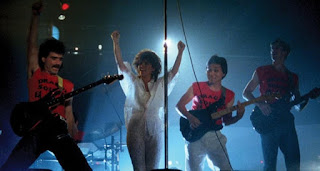 It is hard to rate some trashy films. Films can be really good entertainment in spite of themselves, and it is an even better pleasure to find some trash that keeps surprising you than watching most "quality" films. My friend says that he knows a trash film is worth something if it gets three laughs out of me. I mean proper, good belly laughs when you just can't believe what the film is showing to you, scene after scene. That's as good a rating as any for these movies. Any film that has these three laughs has a special place in my heart.

Lost for decades, the cheap 80's VHS movie Miami Connection was the first real gem discovered by the Alamo Drafthouse Cinema and restored for an audience hungry for some prime cheese and turkey action. Miami Connection mashes together a story of a teen rock band and a crime thriller about about drug-dealing ninjas. It's exactly as bonkers as it sounds. But really, the film is funniest when attempting to be "just another movie". Everyone on screen is extremely awkward, their lines don't sound like anything anyone has actually said in real life, and the basically very clichéd plot becomes more and more bizarre the more elements are thrown into the pot.

The star and producer Y.K. Kim later became some sort of inspirational speaker, and it can perhaps be seen from his script, since such wisdoms are seen in the film such as "Only through the elimination of violence can we achieve world peace". As an actor, he's something to see. It's a bit cheap to make fun of his thick accent, but it is really hard to understand what he's saying, even when it's over-the-top action movie clichés such as "You don't scare me at all. Goodbye!"

1. A lot of the film's fun hangs on how cheesily 80's the entire thing is. So I hope you like mullets, synth-music and godawful clothing. The biggest laugh comes from the great reveal of all of this - after a fight scene where a gang of ninjas have killed some drug dealers and split the loot we see the band Dragon Sound in all their glory. Playing shirtlessly their hit song "Friends Forever" at a smoky, blue-tinted club to some really white-bread audience having trouble clapping along.

2. It's always hilarious when Kim is showing off his tae kwon do skills with ridiculous Bruce Lee -poses and grunts. My favorite is the practice scene where he takes his friends to school by showing a fist to Jack's mouth and humiliating John by grabbing his nose by his toes.

3. The real star of the film is Maurice Smith's keyboard player Jim, who has the most soap opera -like arc which sees him being teased of sending out some mysterious letters. It turns out he's just trying to find his father, probably by mailing to every candidate he can think of. When he finally finds him, he lets out an incredible high-pitched yelp. But alas, fate has a real ironic twist in mind for him, which motivates the surprisingly brutal final fight, which sees Kim brandishing a machete, among other things. Against the Ninja!
at 23:59 No comments: 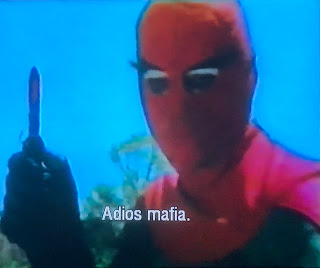 It is hard to rate some trashy films. Films can be really good entertainment in spite of themselves, and it is an even better pleasure to find some trash that keeps surprising you than watching most quality films. My friend says that he knows a trash film is worth something if it gets three laughs out of me. I mean proper, good belly laughs when you can't believe what the film is showing to you. That's as good a rating as any for these movies. Any film that has these three laughs has a special place in my heart.

Turkish exploitation films could be a genre on their own. They are some of the weirdest trash movies one could hope to see, yet I feel like many conisseurs of bad movies don't tend to know too much of them. Turkish Star Wars of course is a cult classic, but there are plenty of other good ones as well. What makes Turkish films special is the total disregard for copyright, good taste or any kind of grown-up logic, which makes many of the movies seem like children playing as portrayed by adults.

Case in point is the film known as Three Mighty Men, which I usually just call 3 Dev Adam. The grubby VHS-ripped film sees a Turkish version of Spider-Man start a brutal takeover of Istanbul's crime syndicates, and who gets sent to stop this lunatic but Captain America and the Mexican luchadore Santo themselves! The Turkish knockoff versions have little to do with their original counterparts, especially Spider-Man (called The Spider), whose costume is red and green, and likes to stab mafiosos with knives and put people in elaborate death traps. I think he was the model for the portrayal of Joker in The Dark Knight.

1. The very first scene introduces us to the brutality of Spider-Man. His goons capture a pretty girl on a beach and they bury her neck-deep in the sand. Soon, The Spider brings out a motor boat, and proceeds to shove the spinning propeller into the face of the girl. This violence is intercut with the smiling face of Spider's girlfriend, apparently telephatically surveying the scene from a completely different setting.

2. Another insane way for The Spider to execute his victims is to tie a gangster onto a pole and attaching two tennis ball tubes to his eyes. He then unleashes two vicious guinea pigs to the other side of the tube. The critters run up to the tube and apparently eat his eyes, killing him. Adios mafia.

3. The film, which is basically a game of tag with people in Halloween costumes, goes out its way to appear "mature". And by that I mean that besides the violence, there are also sex scenes and footage of strippers. It is really hard to figure out what the filmmakers were going for. During one sex scene the film cuts to some fugly puppets taking a glance at each other and cackling. And then to another, puppet, now a policeman, before cutting back to the sex. This is never explained, and the next scene is the first big fight scene between Santo, Captain America and The Spider, in which it is revealed that whenever The Spider is beaten, it is somehow a clone or some other replica and the real villain is somewhere entirily else making his getaway. Goodnight, Americanos! 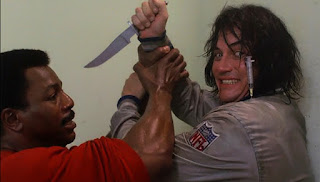 It is hard to rate some trashy films. Films can be really good entertainment in spite of themselves, and it is an even better pleasure to find some trash that keeps surprising you than watching most quality films. My friend says that he knows a trash film is worth something if it gets three laughs out of me. I mean proper, good belly laughs when you can't believe what the film is showing to you. That's as good a rating as any for these movies. Any film that has these three laughs has a special place in my heart.

There's a certain question on whether to include knowingly ridiculous action movies on this column. But I figure, why the hell not, they give me joy. So a disclaimer to this that this isn't a "so-bad-it's-good" movie, whatever those are. Action Jackson is a good romp and meant to be. It just doesn't get the attention it deserves.

Noted Burger King enthusiast Carl Weathers should have been a bigger action star. He has the charisma to carry multiple franchises, and held his own against Stallone and Schwarzenegger (in Rocky 1-4 and Predator, respectively). But sadly, in the 80's the world wasn't ready for an action hero that wasn't Eddie Murphy. Even though Action Jackson has as much ridiculous over-the-top action as anything this side of Commando does, it has largely been forgotten. It does make me laugh in multiple parts.

Three laughs (SPOILERS):
1. The movie opens as sleazily and explosively as any 1980's Joel Silver movie. A future #metoo cancelled rich dude tries to seduce a model girl in his penthouse apartement when a group of SWAT dudes jump through the glass ceiling to kill him. In a move that could not be any more discreet, they shoot him up with a rocket launcher, and get him to fall through the glass to his death. Off to a good start!

2. Action Jackson lives up to his name by running into action by running up to a fleeing cab and jumping onto it while everything explodes in the background for some reason. Jackson is almost supernaturally fit. In the end of this escapade he has a standoff with the car, and he manages to jump up so high that the car drives through under him. Even Captain America would raise his eyebrows to that one. The car promptly drives through a ramp to its explosive destruction.

3. I must give a shout-out to the climax of the film, that is as close to live-action version of a Simpsons McBain bit as anything. Action Jackson goes to his final face-off to a wealthy businessman's mansion by driving a Ferrari to his house. And not only that, to minimize walking, he also drives it up the stairs. Good thing the main villain had maximalist architects working for his home and base of operations.